Stay up to date.

Sky's the limit for OSU

The Experimental Sounding Rocket Association (ESRA) is a non-profit organization that began in 2003 with the mission to promote rocket engineering among universities worldwide. They began the Intercollegiate Rocket Engineering Competition (IREC) in 2006, which has recently found its home at Spaceport America in Las Cruces, New Mexico, and is now more commonly referred to as the Spaceport America Cup. Teams are scored based on their ability to reach their target altitude, their quality of design, the ingenuity and execution of an experimental payload, and even their sportsmanship during the competition. Since 2014, Oregon State University has competed at IREC competitions, with many years of success in various categories on our website: https://osuaiaa.com/esra. 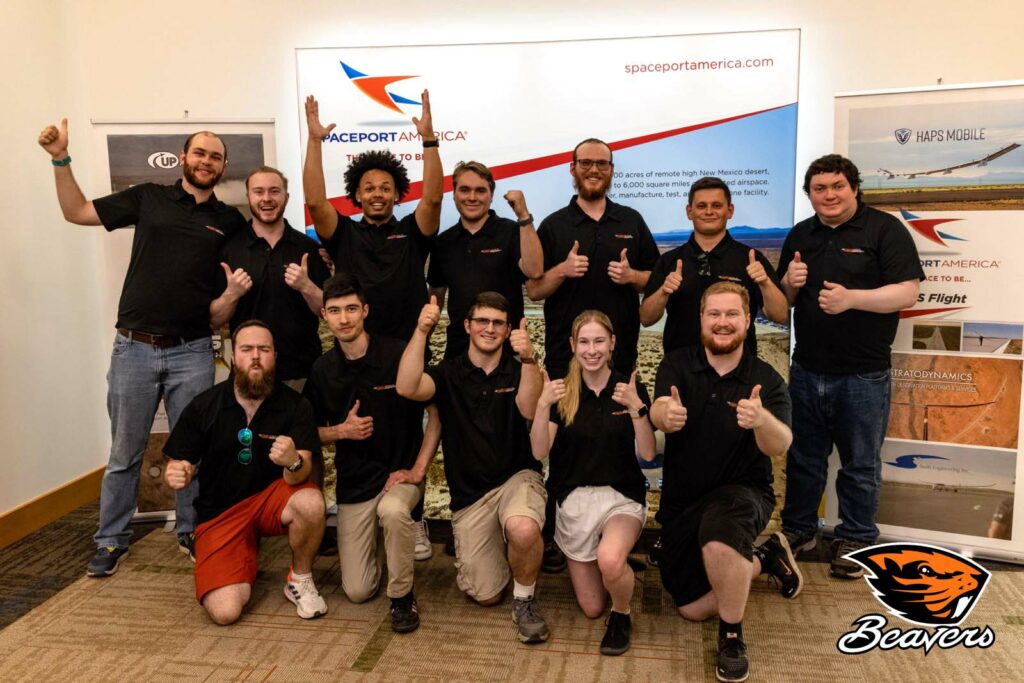 This year, our team was tasked to design, fabricate, and launch a solid SRAD rocket with the target altitude of 30,000 ft abv. SRAD (student researched and designed) rockets have a motor designed and built by the team, whereas many teams choose to fly COTS (commercial off-the-shelf) motors. We successfully built a 60 inch long O-class solid motor with a Hydroxyl-Terminated Polybutadiene (HTPB) binder with aluminum fuel and Ammonium Perchlorate oxidizer. The fuel was tested in subscale and fullscale static fires over the course of the year, but in late March, we had a catastrophic failure during a fullscale test fire, as seen in this video. Many motor components were damaged beyond repair, and the odds of us pulling together a successful test fire with new components before competition seemed bleak. However, the team rallied and put in countless hours to identify the cause, mix new propellant, acquire more funding, and construct a new motor. Just one month later, the team had a perfect test fire, watch here.

There were 95 teams representing 16 different countries at the Spaceport America Cup this year, totaling 1300 participants. Of those, 30 competed in the 30k competition, 13 competed with an SRAD rocket, and 8 used solid fuel.

Our rocket was named Initium Novum (meaning New Beginnings). The upper and lower body tubes of the rocket were made by Innovative Composites Engineering. The lower body tube is filament-wound carbon fiber, which is able to withstand the heat surrounding the motor, weaved into reinforced fiberglass, which allows the motor beacon attached to the top of the motor to communicate with ground control. The upper body tube is also fiberglass for the same purpose of communication. The nose cone of the rocket was repurposed from a previous team and heavily refurbished. The coupler section, built by Miles Fiberglass & Composites and Composites Universal Group, is made of pre-impregnated fiberglass sheets. The coupler connects the upper and lower body tubes, and it must resist significant bending forces to keep the rocket rigid during flight. This section also holds the avionics bay, which includes all computer systems that track altitude, send GPS coordinates, and trigger ejection. When the rocket reaches 30,000 ft, a black powder ejection charge causes separation in the middle of the rocket and releases the drogue parachute, which slows the rocket’s descent. At 1500 ft, a second ejection charge causes the nose cone to separate and eject the larger, main parachute, which slows the rocket to the appropriate landing speed.

One of the other major components of our rocket is the experimental payload, which is deployed from the rocket during main parachute ejection. Our payload subteam designed a “Farm Bot,” which would be carried by its own parachute away from the rocket; land; plant, water, and fertilize seeds; and track environmental conditions on the ground. The Farm Bot also contains altimeter and GPS components so that it can be recovered. 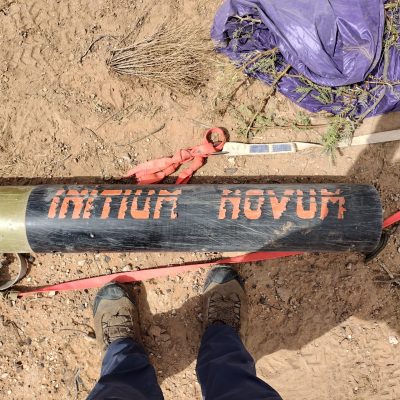 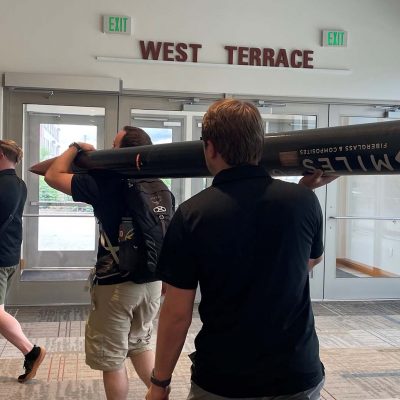 After numerous weekends of bad weather following the completion of the rocket, we were finally able to successfully test launch in Brothers, Oregon on June 13th. Play the full video (Left) The rocket and payload were recovered with no damages, and the video only showed some minor adjustments that needed to be made prior to competition. The team was ecstatic.

There were 95 teams representing 16 different countries at the Spaceport America Cup this year, totaling 1300 participants. Of those, 30 competed in the 30k competition, 13 competed with an SRAD rocket, and 8 used solid fuel. The week became rather stressful as thunderheads rolled in, and an entire launch day following a deluge had to be cancelled due to impassable dirt roads. Come Thursday, our team was one of the first at the 5am gate opening. All of the rocket assembly must happen on the launch site, so integration began at dawn and continued into the afternoon. During final comms testing with the avionics bay, we had some minor electronic issues that set us back from final assembly. However, we were able to be part of the day’s last handful of launches, as a storm was beginning to approach.

Runner up for the 30k SRAD Solid Award

Some administrative setbacks caused final scores to be released nearly two weeks after competition, but amidst all of the chaos of the launch, OSU had a very successful week. Because of our accuracy in our flight, we were runner up for the 30k SRAD Solid award, and we got a perfect score for design and very good marks for our technical report. While the launch came with an unfortunate series of events, we are very thankful we proved the ability of the rocket’s performance through testing, and we were praised for carrying the OSU legacy of skillful and thoughtful design and construction.

Get notified about what’s new